Skip to content
Here’s my take on Without A Goodbye by Swati Kumari. 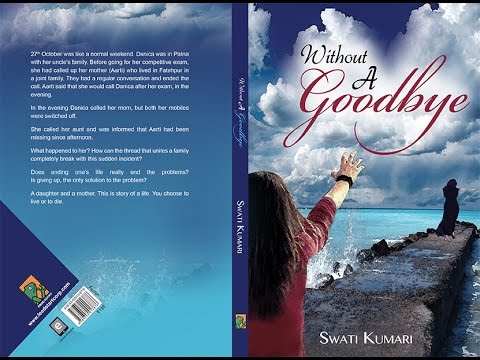 Blurb:
“27th October was like a normal weekend. Danica was in Patna with her uncle’s family. Before going for her competitive exam, she had called up her mother (Aarti) who lived in Fatehpur in a joint family. They had a regular conversation and ended the call. Aarti said that she would call Danica after her exam, in the evening.
She called her aunt and was informed that Aarti had been missing since afternoon.
What happened to her? How can the thread that unites a family completely break with this sudden incident?
Does ending one’s life really end the problems?
Is giving up, the only solution to the problem?
A daughter and a mother. This is story of a life. You choose to live or to die.”

Overview:
The story revolves around Danica and her mother, where Danica’s mother is the hero of the story. The story starts with a conversation between Danica and Swati (Danica’s best friend) where Swati comes to know that Danica had been hiding many of her sorrows under her smile . . . since long. Then begins the unveiling of the story. The author portrays Danica’s past, the reasons of her sorrow with a great passion. The question why her mother was disappeared and never came back ALIVE plays a major role in the story. Danica’s father showed as a villain in the beginning, then change in his feelings and then his turning up on positivity again and being villainous again makes you hate him.
The journey of Danica and her mother is no less than a torture, and the way Danica’s mother is shown handling all her pains and sorrows under the brutal treatment of her husband, is the emotional perspective of the story. The story keeps unfolding the past of Danica’s mother and near the end it comes back to present where Swati is about to meet a shock of her life. In the end the author makes a twist (predictable for me though), but does end on a beautiful note making you think about your life once for sure. The story indeed covers some social problems of the Society.
These lines indeed make sense which I liked the most:
‘If red is their favourite colour, it doesn’t mean that the blue which I like is bad. Why should I wear red unwillingly? Why can’t I wear the blue that gives me pleasure? And I wear red unhappily, who is guilty – me or the society?’

Though I personally felt that the story is stretched a little in the midway, it still feels fine because it is readable. The story has quite a few different tracks which change amidst the read, though the segregation of the chapters still keeps a flow. Overall, a MUST READ story, different plot, different thinking, and a great effort.
Regards,
Aniruddha B.Pathak.