Skip to content
Review on the book Romeo, Juliet and Hitler: Can he put brakes on love? written by Rohan Gautam. 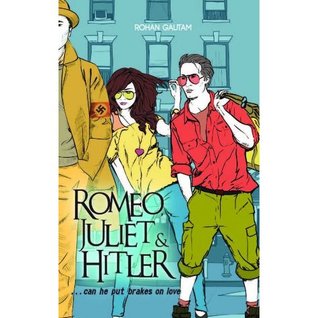 Its basically the author’s own love story which happened a bit similar to a Bollywood movie so he got excited and decided to write a book on it. And luckily the publication agency accepted it and got the book printed on paperback.
Rohan meets Shreya on a train journey and love blooms between the two youngsters . Their love, as any other teenage love story faces social calamities and family predicaments. Rohan’s life goes upside down at many times and so happens with Shreya as well when she feels the need to sacrifice her love for family.
Taking about the hitler in the story, its Shreya’s elder brother who is a hard to impress man and Rohan has to impress him so that he doesn’t put the brakes on Rohan and Shreya’s love.
The book’s title doesn’t seem appropriate because of the fact that the entry of the “Hitler” occurs so late in the story that its importance lessens in the views of the reader.
Belonging to the romance genre, the storyline doesn’t provide anything new and the twists and turns give the “obviously” feeling. The book also supports the age old media legacies like drinking after breakup, break up due to family, movie buff cops etc.
The climax occurs when you least expect it to happen , making the reader whine about it.
Ratings – 1 out of 5 stars.
The book overally seemed sincerely written because the author’s effort in writing the book is clearly visible , the english used in the book although not fantastic yet was error free. The language is easy and narrative making it easy to imagine the situations.  The chapter names were catchy though filmy. If you like reading to quite a crazy extent then the book is just for you . The way how Rohan impresses Hitler brother will actually surprise you because it was something which the reader would have not expected. Infact , its the only surprising fact in the entire book. The story will make you think “Do love stories like this seriously exist?”
Regards,
Banaja Prakashini.